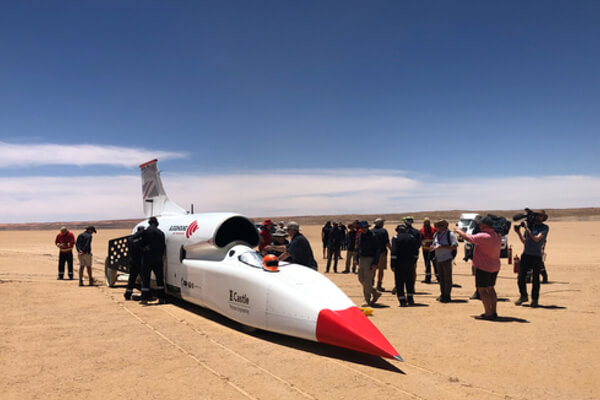 Powered by a rocket bolted to a Eurofighter-Typhoon jet engine, the vehicle aims to show its potential by going progressively faster, year after year. Current high-speed trials have seen Bloodhound top 500mph, on their final day this year was 628mph.

The next step would be to break the existing world land speed record (763mph; 1,228km/h). The racing is conducted on Hakskeen Pan in Northern Cape, South Africa.

Since March 2019, the Bloodhound LSR project has been based at the UK Land Speed Record Centre in Berkeley, Gloucestershire.

The project is helping to push boundaries and demonstrate pioneering new technologies.

Ian Warhurst, CEO of Grafton LSR Limited said "This project has inspired so many people over the last 10 years, including both students and the wider engineering community. Engineers like solving problems and theorising about what happens when you pass the limits of known understanding. We look forward to continuing this inspiration into the future."